Previously in the story of Total Impact… we learned that, when Access came to making total impact investments, the choice of asset managers was limited. But now they had one, and it was time to start investing.

The latter half of 2016 is a busy time for Access and Rathbones. The investment journey begun in earnest in July 2016 soon gets up to full speed. By the end of September, Rathbones has invested nearly £35m, 21% of which goes straight into the bullseye (“charities and social enterprises delivering social impact in the UK”). By the end of December, it’s nearly £38m and 27% respectively. The original working group has become the Endowment Investment Committee, a committee of the board to give it more executive power, and to continue providing guidance. 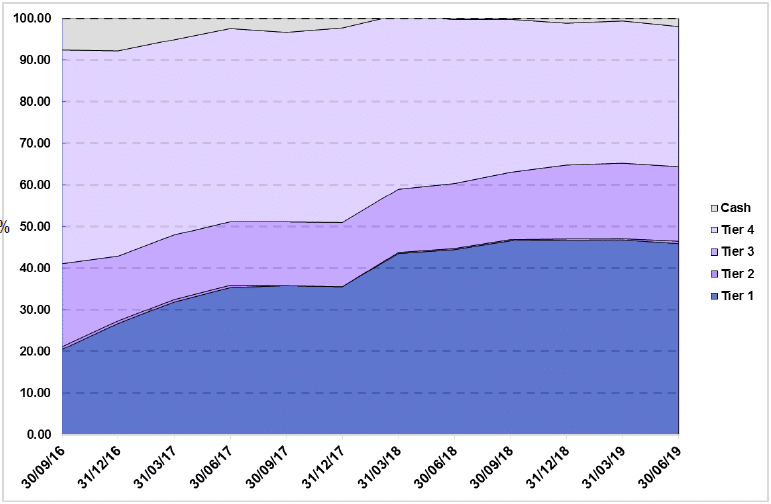 An impact investor would recognise many of the names that are in the bullseye by the end of 2016. The smallest single purchase is £17,000 in Retail Charity Bonds plc, which is lent to the Charities Aid Foundation (Rathbones buys more of this later); the largest is £3.65m in Motability (the company behind the scheme that provides lease cars, powered wheelchairs and scooters to people receiving mobility allowance in the UK), held in different bonds.

Jumping forwards three years to January 2019, £10.3m of new endowment money and £3.7m of interest reinvested brings the credit side of Total Impact to £52m, from a starting point of £38m. Minus £0.3m in management fees, and £7.8m Access has withdrawn to spend on its programmes, Access has £43m invested in Total Impact across all four tiers of the bullseye; and £0.9m in cash. The portfolio looks like this: 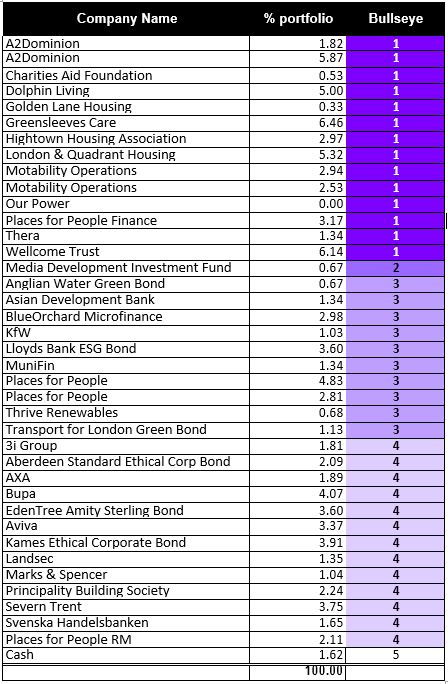 January 2019 begins with a jolt. Our Power, one of the first not-for-profit energy suppliers in the UK, set up by 35 Scottish housing associations and aiming to provide energy at 10% less than standard tariffs, is in trouble. It has 38,000 customers, plus investors including the Scottish Government, Big Society Capital, plenty of individuals, and Access. Despite efforts involving the investors to work out a solution, Our Power runs out of cash and collapses at the end of January 2019.

It becomes clear that Our Power was trapped by having to pay a return on some of the debt it issued, beginning in January, plus rising wholesale energy prices that reduced its margins, and big problems with its customer management and billing, all coinciding with a period of ambitious growth.

The collapse of Our Power saddens its investors, particularly for those seeking a social impact: it was targeting some of the most vulnerable of the 3.5m people living in fuel poverty in the UK, challenging the big six energy suppliers by offering cheaper tariffs. For Access, the loss of £440k is manageable in investment terms (about 1% of its total impact investments is within the risks of default on Access’s endowment fund) but is highly disappointing because of what can’t be done on the programmes side: “every £15k lost being a Reach Fund grant that couldn’t be made”, as one interviewee put it, equates to almost 30 grants not available. Impact is being considered on both sides of the equation.

The sadness doesn’t stop some hard questions being asked: was there any pressure to buy, because it would have moved more investments into the bullseye? Did the perceived scarcity of suitable charitable bonds make it harder for the investment team to say no? Was the selection of bonds eligible for Social Investment Tax Relief (SITR) the right one? (The SITR rules guarantee a place at the back of the queue of creditors). Speaking to other investors, all of whom did their own due diligence, gives the team some confidence that they didn’t miss something critical.

This means that the endowment will be used up more quickly to support programmes, which has a knock-on effect on the returns because it will be invested for less time and, crucially, because Access might have to sell some bonds earlier than planned and at a lower price, to keep up with the faster flow of money to programmes. This could mean that less money is generated by the endowment overall.

One option could be for Access to change its investment choices, seeking higher returns (and risks) to keep up with the demand from programmes. But maybe not. Maybe, as the name suggests, the total impact of programmes plus investments will be much the same: it’s the balance of impact that will change, with a little more from programmes and a little less from investments?

These are live issues for Access right now. No one said Total Impact was going to be easy.

Learning from life: the questions that Total Impact is asking of Access and the sector