It’s 2014, more than 5 years after the collapse of Lehman Brothers became the icon of the most perilous financial crisis since the great depression of the 1930s.

Five years have introduced everyone to some new terms: austerity, the big society, food banks. There’s a new normal of near-zero interest rates, the retreat of the state from many of its traditional obligations and rapidly rising demand for the help given by charities.

The intensification of demand for grants and the drought of returns in a financial crisis is beginning to create some challenges for foundations, too. When return from investments is low and need is high, how can generating money to support good causes be reconciled with the ethics of where the returns come from?

Arguably, this is a long-standing contradiction for foundations, where historical wisdom is to separate making money from philanthropy. Economic circumstances combined with several high profile media events bring this into sharp relief in 2014. One year earlier, the Church Commissioners were found to have indirectly invested in Wonga, despite the Archbishop of Canterbury’s opposition to the high street lender. Then Comic Relief is rocked by a Panorama programme reporting that the charity’s money is invested in the problems it’s trying to fix: alcohol and arms. It’s a symptom of separating money-making from grant giving and Comic Relief is not an isolated case.

Meanwhile, a small team in the Cabinet Office is working on endowing a new organisation that will become Access – the Foundation for Social Investment.

Originally, Access is conceived as a response to the emerging gaps in social investment: the need for smaller amounts of finance, available with fewer strings attached, alongside some grant support for the organisations receiving the money. Access will also have an expendable endowment of £60m it can use to build the capacity of charities and social enterprises. Making sure that investment of the endowment is aligned with the organisation’s purpose seems appropriate, even necessary, particularly when that purpose is to improve VCSEs’ access to capital, so they can be more resilient and have more impact.

The exam question becomes: how do you use all the assets at your disposal as a foundation to generate maximum impact? Or, as one witness put it, “how do you use capital to achieve social impact, not just the income thrown off by the capital?” It’s an approach that the Cabinet Office called Total Impact. Interestingly, Access now uses the term to refer to its investment approach for its endowment, but the original framing is even broader: Total Impact is just that – the whole of the results of a charity’s activity, reflected, for example, in this 2014 working paper from the Cabinet Office, and how it seeks to achieve maximum benefit through everything that it does.

With regards to the use of endowments, the Cabinet Office’s thinking was “well ahead of the market”, in the words of one witness, and there were few examples in the UK at this point. Beyond Panahpur, which was well on its way to moving all of its assets into impact investments (accomplished in 2016), the Cabinet Office points to KL Felicitas Foundation and F.B. Heron, both based in the United States, as ones that are making significant progress towards a majority of social impact investment, as opposed to mainstream investment. In this sense, Access’s Total Impact approach to its endowment is unusual but builds on the experience of others – and some of this experience will shortly become available to Access through the people it works with.

The team at the Cabinet Office comes to the conclusion that, pound-for-pound, investing the endowment for impact and recycling the returns into more impact through programmes, will create more impact than the usual practice of maximising financial returns: a challenge to conventional wisdom.

It is now February 2015. The legal documents that create Access are signed by the Minister for the Cabinet Office and Access’s founding chair. They contain the code for Total Impact, including:

“…to take a total impact approach to allocation of its resources, including in its investment strategy…”
“consider and evaluate the social impact of all of the Activities (including its
procurement)”
“…include reporting on…[the] total social impact achieved by [Access] across all its activity…” “…notify the Cabinet Office if…[there is] a material diminution in the value of the grant”

The mandate is in place: Access’s job is to put the aspirations into practice and, for that, they need people and a process. The Access board, itself not fully assembled at this stage, sets up an endowment working group so it can bring in external talent from outside whilst keeping control of the decisions.

Besides Seb Elsworth and Janie Oliver from the executive team, the original working group that comes together for its first meeting in June 2015 includes:

This group had strong experience of working at the intersection of finance and social impact, with the vantage points of philanthropy and social investment well represented. Access’s application of Total Impact to its endowment was thus built on the experience of other organisations and people who had worked with them.

The first meeting focuses on some big issues: the investment model, the impact model, and who should manage the assets. The questions include…

The people in the room share a high level of enthusiasm for the task. It was a unique opportunity to go for best practice with the endowment; another of the witnesses involved at this stage described several of the other people involved as “pioneering” in the spirit they brought to the work.

This enthusiasm and sense of energy, allied with the urgency of investing early to create the most impact and the most return for Access’s programmes, means the working group resolves to meet monthly and get stuck in to move Total Impact forwards.

Discussion: one of the interviewees reflected that four factors emerged in allocating the foundation’s endowment: 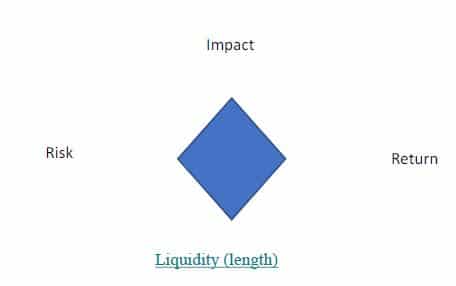 For foundations and those working with them, how have you navigated (or are you navigating?) the decision making process around aligning endowment with mission?

To what extent might these four factors play out in your work? Should there be a “sweet spot” or a spread?

One of the remaining unknowns for Access is not only how these play out but also how will they influence each other and change over time? Access’s 10-year life makes for a particular combination of these but the configuration of them is likely to be different for other foundations looking to invest for Total Impact.

An investment model for Total Impact and the classic entrepreneur’s dilemma: if you can’t buy what you need, can you build it yourself?