In recent months the Reach Fund has seen a significantly larger than anticipated increase in eligible applications, leading to expenditure in some months of more than double the budget. We have therefore had to think carefully about how we manage this going forward in order to ensure that the fund can remain available for as long as possible. Here we share some of the challenges and considerations that this presented and the rationale behind the approach that Access and SIB have decided to take.

A year ago, in October 2018, the Reach Fund’s two year and three month trial period came to an end. During this period approximately £3.4m in grants (including a small proportion in Access Point referral fees) had been awarded. Due to the success of the Reach Fund’s initial phase (see learning report) Access committed a further £7.2m to the Reach Fund over a period of three years, until October 2021. The extension increased the budget to £2.4m per year on average compared with the c. £1.5m annual expenditure averaged up to that point. We therefore expected to award grants of around £200k per month.

In February of this year Social Investment Business (who manage the Reach Fund) alerted us to a sudden and significant peak in applications which had led to grants totalling twice the budgeted amount – which kept the SIB team very busy that month! Whilst activity over the following couple of months at first appeared to be returning to budgeted levels, applications then peaked again in May, but this time stayed high throughout the summer. Over the last six months grant spend has averaged £334k per month. During the first year of the new three-year budget expenditure has totalled £3.35m, leaving £3.85m across the next two.

(Note: a previous peak around July 2018 can be attributed to a spike in applications when the fund’s initial two-year phase was coming to an end)

Despite a lot of careful monitoring and forecasting by SIB, this sudden and significant spike in activity did – to be completely honest – take us all somewhat by surprise. We are able to identify some contributing factors in the activity of individual Access Points and the lending profiles of their investment funds – particularly those 13 who are lending through the Growth Fund. However we are still unable to fully explain the scale of the overall increase. A number of Access Points have successfully referred a significantly higher value of applications into the fund over the last year than they had forecast to – one by 229%!

One may ask why we allowed them to do so, which is a fair question. The Reach Fund budget has always been managed by awarding each Access Point with an “allocation”, up to which value they can support applications from their potential investees. Whilst these allocations were always there to serve as a demand management mechanism, for most of the Reach Fund’s history this has not been needed due to the more sustainable levels of demand seen previously. Therefore in the past allocations have tended to be treated as flexible and – so long as appropriate – could be topped up on request. Whilst some Access Points have always utilised more of the budget than they originally anticipated, many others have used less and in the past this has balanced out quite well.

Therefore awarding allocations has in the past generally been as much about forecasting how the fund would be spent as about budgeting the overall rate at which it should be spent. This is particularly the case since the Reach Fund is deliberately designed to empower Access Points to make decisions about which charities and social enterprises the grants are most appropriate for and then to work with those organisations to submit applications to SIB which, providing they are appropriate to the aims of the fund and the AP’s support is sufficiently demonstrated, SIB can then approve. Whilst the integral role of the Access Point will not change, due to the recent spike in activity continuing to just provide APs with top-ups on request is unlikely to be a sustainable approach going forward.

Beyond keeping Access Points updated on the increase in overall programme expenditure, SIB and Access decided not to immediately implement any changes earlier this year when the activity increase first started to emerge. This is for a combination of reasons. Firstly, we wanted to see whether the increase in activity appeared to be sustained before we reacted to what could otherwise have just been a particularly busy couple of months. Secondly, and most importantly, we did not think it would be fair to suddenly make changes before the period of current allocations came to an end. Doing so would have unfairly penalised some Access Points over others, depending on amount of their current allocation they had already used or the point in the year at which they might have applied for a top-up. We therefore decided to hold off until after the end of the programme’s annual allocation cycle in October.

The situation presented us with a number of options which were carefully considered prior to that point:

We have recognised the importance of providing ongoing investment readiness support by leaving some headroom in Access’s ten-year budget to hopefully enable us to continue to fund this in some form beyond the current Reach Fund period (this is partly dependent on any returns from investing our endowment, which will not be realised until later on in Access’s life). However, were we to increase the pre-2021 budget it is unlikely that we would be able to fund any such investment readiness support beyond 2021. There is not currently another funder who provides an investment readiness support programme on the scale of the Reach Fund or (to our knowledge) one who is preparing to do so in the near future. Therefore whilst we are hopeful that this is something which others will take up the mantle on in time, at present we felt that increasing the short-term budget of the Reach Fund would not be the most effective way of meeting the longer-term needs of the sector.

Furthermore, we do not think that demand in and of itself is necessarily an appropriate reason to increase the overall budget of a programme. Whilst all indicators continue to suggest that the Reach Fund is working well and is leading to the desired outcomes, we will continue to evaluate this carefully throughout the fund and to learn as much as we can about how the resource is being most effectively utilised in order to help inform our and others’ decisions about what could come next (the next evaluation update will be published in Spring 2020). 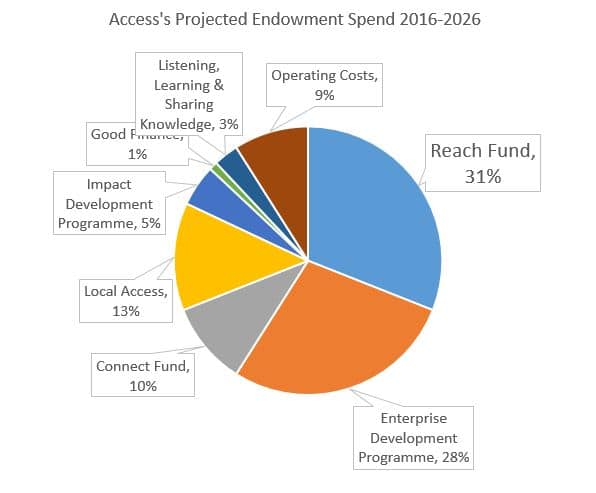 What this means in practice is that the majority of Access Points will have received an allocation of less than they will have been hoping for (Access Points’ total requests for the next 12 months exceeded the entire remainder of the two year budget by almost £1m). Whilst we have tried to ensure fairness by taking into account factors including each partner’s size, target market, usage of the Reach Fund to date and their own forecasts and requests, we understand that having more limited allocations will still present challenges for some. However we know that the Access Points will understand that we do not have an unlimited pot of money, and we are hopeful that by giving them each a two-year allocation upfront and allowing each of them to effectively decide how quickly they wish to spend it we will empower them to make the most effective decisions. The Access Points are best placed to choose the right organisations to back – those for whom the Reach Fund will make the greatest difference to their ability to raise investment – and we have no doubt that they can continue to help drive value for money in terms of the size of grant needed to undertake the necessary work. Access and SIB have also taken the decision to close the Reach Fund to new Access Points, so that we can divide the full remaining budget across the existing 30.

Over the last few months three of the Access Points have been helping us to trial whether providing Reach Fund grants on the much smaller end of the scale and via an expedited process might, in some instances, prove most effective. We will shortly be starting to evaluate this trial and look forward to sharing the learnings and outcome of that next year. If deemed successful and appropriate for the Reach Fund we may then roll it out to all Access Points, to offer them an additional option for making their allocations go further. However even in the regular grants we may start to see average application sizes reduce. As when faced with tighter budgets Access Points may even find that by continuing to focus carefully on only the most core and vital investment readiness needs they can still find a way of supporting a similar number of organisations through the Reach Fund as before.

In the meantime we would be happy to continue the conversation. If you have any thoughts about the current or future provision of investment readiness support in the sector, or if you would have taken a different approach to managing the remainder of the Reach Fund budget, then please feel free to get in touch: helena.tuxworth@access-si.org.uk