After months of preparation, much thought, occasional disagreement and a sprinkling of nervous excitement, we gathered. A pretty comprehensive selection of the people currently involved in making social investment happen in the UK, spending two days trying to make sense of it all, and find ways to make it work better. Below is the result of an artist’s efforts to capture the key questions and issues we discussed: no doubt there’ll be an element of ‘you had to be there’ in looking at this, but it at least gives a flavour… 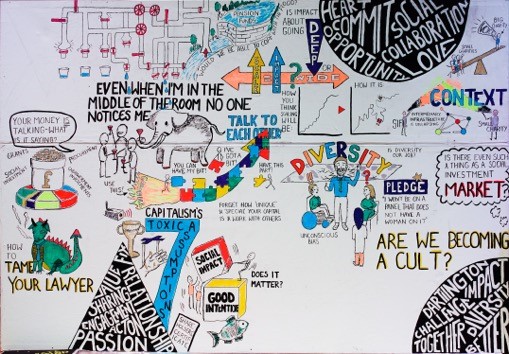 While I suspect the answer to “Are we becoming a cult?” is best left to those who weren’t at the event to answer, it feels right that we should have put each other under pressure to grapple with the other questions you can see there. I’ll pick out three which catch my eye:

“Is there even such a thing as a social investment market?” challenges us to consider the gap between ‘pure’ commerce and what we are collectively trying to achieve. Is the use of subsidy a distortion of a market we should seek to eliminate, or a necessary and powerful tool to direct capital where we wish it to go? If the latter, how is that any different from, say, the use of tax breaks in industrial policy? To provide more detail to advance this debate, Access has recently commissioned some research on the use of subsidy in the UK social investment market over recent years: more detail to come in the next few weeks.

“Your money is talking, what is it saying?” highlights the fact that vast amounts of money are invested at arm’s length, whether personally through pensions, or, like Access, through a Foundation’s use of asset managers to manage its endowment. We and others are seeking to be more open and ambitious about the ‘total impact’ to which such asset managers can aspire. The challenge set on pension funds (can we convince them to direct £100Bn into impact investments) raises a serious question as to whether that volume of capital could find enough demand: in other words, would we be ready for that volume of business?

Finally “Is diversity our job?” is a bit more simple to answer. Yes, of course it is: as individuals, organisations and a community. As a white, middle-class, middle aged man, I’d say it’s more my job than others’. While it felt good to take ‘the pledge’ (“I won’t be on panel that doesn’t have a woman on it’), the energy and consensus of the workshop on this subject suggests there is much more we as a community can be doing to live up to a shared ambition. As another of our delegates Eve Poole has argued, a better gender balance is a route to a better bottom line in the private sector, so we have no excuse: diversity is good for the business of doing good, and gender is just the beginning. Let’s emulate the UK’s most eminent Judge and go out of our way to ensure our colleagues better represent the people we collectively seek to serve.

These are just a few reflections from a rich and wide-ranging set of discussions, which have, inevitably, raised more questions for us to pursue. We in the organising committee are meeting next week to look at the feedback we’ve received, reflect and suggest what we’d like to do next. If there’s anything you want us to hear before then, get in touch.

Danyal Sattar, the beating heart of this event, kicked off the event with a reminder that everything we’re doing in social investment is about people: having spent 48 hours with this bunch of talented, curious, impatient and ambitious people, I’m more convinced of that than ever.