The previous two blogs from Access’ Director of Learning explored some of the recent changes in funders’ approaches towards monitoring and learning during the Covid-19 emergency response period. They reflected which of these changes could (and should) endure into the “new normal”.

One of the key themes to emerge was around trust. In the context of the emergency response from funders and foundations this “trust” was often centred around relaxing reporting requirements and adopting light touch application procedures to get emergency funding quickly out the door to existing grantees to enable them to get on with delivering their much needed social impact activities on the ground.

There’s been a lot of chatter about whether this lighter-touch approach could endure for these existing grantee organisations – if they could be trusted to a greater extent to deliver their work on the ground, and funders be instead concerned with whether they are supporting adaptive, resilient, learning organisations. The Association of Charitable Foundations report looking at “The Pillars of Stronger Foundation Practice” concludes that amongst other things, a Stronger Foundation is one that:

“Recognises any power imbalance that exists between it and those it funds, and seeks to minimise it”

“Regularly reviews the nature of the funding relationship, and the extent to which it is genuinely relational or transactional in its approach”

But what happens if you’re a funder looking to set up something new or looking to work with new organisations where you don’t have any track record. In those cases it is perhaps less easy to adopt the more trusting approach?

Here, Access can look to its recent research findings from the first phase of the Local Access Programme.

The Local Access Programme is a joint ten year place based investment programme between Access and Big Society Capital. Through a package of enterprise support grant funding and blended social investment it seeks to strengthen local social economies and enable charities and social enterprises within places to become more resilient.

The first phase covered in the research findings is the selection stage – i.e. deciding which Places the programme would work with and invest in (from a long-list of 38 down to a final selection of six). The final six are Hartlepool & Redcar, Bradford, Gainsborough, four boroughs in Greater Manchester, Bristol, and Southwark.

One of the guiding principles of the Local Access Programme, including during this development and selection phase, was trust. Local Access wanted to trust prospective Places to develop proposals that genuinely reflected their local needs and to allow flexibility in the interpretation of the overarching programme aims so that proposed plans were a better fit with local context.

This is of course easier said than done – even at the proposal and selection stage. There is an inherent tension between relinquishing control to local organisations on the one hand so they develop proposals which address their local needs, and supporting those organisations to align their ambitions with the overall Programme objectives on the other hand. Too much central direction and not enough trust can result in selecting places and organisations who are simply better or more experienced at drafting proposals that match funders’ scoring criteria.  But not enough support and steer can result in plans that do not align to a programme’s purpose & objectives, potentially wasting time and effort in development.

To see how we (Access and Big Society Capital) did in this selection phase and to understand what worked well and what didn’t go so well, we commissioned Access’ Learning partner, The Ti Group, to conduct an independent evaluation into the process. This involved a survey and interviews with people within places on the ground.

Perhaps by far the most interesting finding from all this was that to make it work, you can’t just – for want of a better expression – “throw trust” at places and organisations. It has to be a considered and well planned process. Devolving more trust, control and decision making to front-line organisations is still, in some instances, and for some organisations, a relatively new and significant shift away from more traditional ways of working. It takes some adjustment from both sides.

The research found for example that whilst people within participating organisations overwhelmingly welcomed the approach and found that the open-ended process enabled their creativity (90% of respondents felt empowered to shape it around the needs and priorities of their place and 75% said that it helped them think differently) it was not without its challenges. Being accustomed to a particular way of working in developing proposals for funders meant there was also at times anxiety. This included perceived sub-text around what Access and Big Society Capital were “really” looking for; a desire for more guiding information and a sense from some non-lead partners within places that vital information wasn’t cascading down. 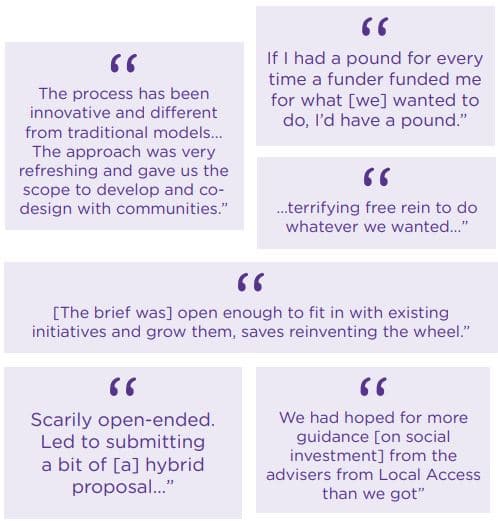 So if we know these new ways of working can be “anxiety inducing” what does this mean for funders and foundations seeking to relinquish control when setting up something new, or when working with new organisations where they don’t have an existing track record. How do you ensure all organisations can equally thrive in a new “more trusting” mode of operation.

These findings, along with the others in the report, are not only important for Access and Big Society Capital in shaping the next phases of the Local Access programme. They are also very timely in light of the shifts we’ve seen during Covid-19 towards relinquishing more trust and control to on the ground organisations. It is a useful piece of the puzzle in helping funders understand how to best go about this, particularly when working with new organisations.