We are delighted to have signed our second Growth Fund deal last week. Key Fund will run the Northern Impact Fund, building on their great track record of making small loans to charities and social enterprises across the North of England and midlands. You can read more about the first two funds open for business here.

Behind the scenes we continue to make good progress in deploying the Growth Fund:

We made a total of six offers to organisations (two have been announced above), three are in “execution”, and one has withdrawn. What we mean by execution is that they have been approved and we have made a formal offer, and we are finalising the details of the legal agreements with the social investor. So we expect to sign and announce other deals during the autumn.

There are five deals  in the due diligence stage. That means that they have been approved at first round JIC meetings and are awaiting the completion of the due diligence on the proposal before they go back for a final decision. The next JIC meeting is at the end of October.

In total we have received 48 expressions of interest to the Growth Fund, of which 19 are currently live (five approved, seven being considered at JIC and seven from whom we are awaiting completed applications). The remaining 29 proposals were either ineligible, withdrawn, rejected or are on hold.

One offer we had made to a social investor lapsed as there was a material change in their business outlook which meant delivering the Growth Fund was no longer an activity they felt they were able to undertake. This was a shame but entirely understandable given the increased uncertainty in their business.  We hope that they may be in a position to come back to the Growth Fund in the New Year.  This just goes to show that not every offer necessarily results in a fund being launched and that there are many things outside our control that can delay or prevent us from getting a new fund over the line, even at the final stage.

If the 12 active proposals are all approved and signed then we will be well over 50% committed in the next three months or so, which means we are largely on-track against our deployment plan and could be fully deployed by end of 2017.

We recently published details of our three portfolio themes. Currently the distribution of the applications across the various stages of applications is: 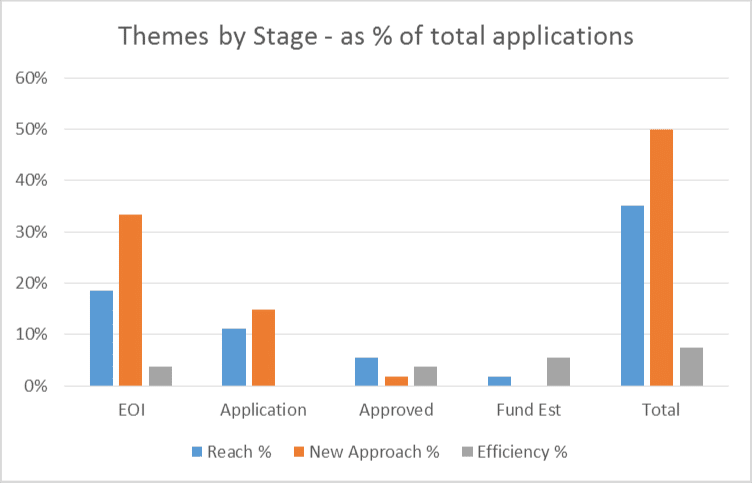 As outlined in the call for proposals we are still actively seeking new proposals, especially from organisations who have great reach into the social sector and organisations who can offer new approaches to delivering social investment.